Is Malware Harmful to the computer? 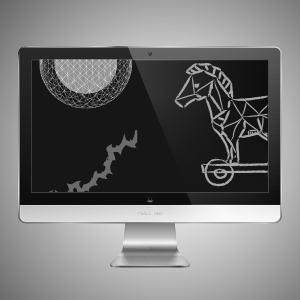 The definition of malware is any software with malicious intent on the computer. Malware comes in many forms to trick the users into installing them. Once installed, they can seriously damage the computer.

Knowing how harmful malware is to the computer and the different types of malware give us a better understanding of the definitions of malware.

How is Malware harmful to the computer

Malware is harmful because it can modify the core of the operating system, destroy data, and steal personal information. The damage it does is sometimes irreversible.

Malware can be difficult to remove because it has the ability to directly attack the computer memory. In some cases, Windows reinstallation is required just to delete it from the computer.

An infected computer usually doesn’t show any sign of malware infection until a major damage is done on the computer.

Now that we know how harmful malware is, let’s discuss the common types of malware that can attack your computer.

Trojan enters the computer by pretending to be a trustworthy software. Once installed, it modifies the computer settings, destroys data, and creates a backdoor for the hacker to control the computer without the user’s knowledge.

A worm can be installed through an infected attachment or spam. It is able to replicate itself independently within the computer and consumes the computer memory. Once the memory is overloaded it results in a critical error.

A worm can slow down the Internet connection by consuming a great amount of bandwidth.

Spyware is often used to monitor the computer to steal personal information. By gaining access to the computer, spyware can turn on webcam and microphone to spy on the victim. It is often installed through Trojan or website cookies the hackers exploit.

Viruses are spread through an infected download or attachment. Unlike worms, viruses are incapable of spreading themselves in the computer without a human action. The user must execute the malicious file first before the virus is activated.

Rootkit attaches itself to the Kernel of the computer - the part of the operating system that controls the memory and hardware. If a certain type of malware is combined with Rootkit it’s difficult to remove because Rootkit prevents the removal of the malware.

Keylogger steals username and passwords by recording the keys typed on the keyboard. It reveals the information to the hacker. Keylogger functions without causing a major damage to the computer, making it hard to detect.

How is Malware Installed

Every time a user accesses the Internet, the computer is already at risk of malware attack. Malware is spread in different websites, pretending to be reputable software to attract their victim.

Sometimes malware pretends to be an application that you are looking for. It flashes a message on screen saying that a specific program needs to be updated with a download button. When the user clicks on the bait the malware enters the computer.

So how to avoid fake installer? It is important to scan the file before downloading it.

Malware also gets installed through an infected email attachment. It pretends to be an email from a relative or a friend with an attachment and a message saying to download the attachment to view a funny photo or video.

Before clicking on the attachment, confirm if the email comes from the sender by sending a separate message. This prevents malware infection.

Phishing Link redirects the victim to a fake website that tricks the victim into downloading programs with malware. Phishing link is also included in apps. It generates a fake login page to steal username and passwords.

So how to know if the link is infected? Use a third party to scan the URL such as Virus Total or URLVoid.

Malware spread through ads is called Malvertising. Hackers insert infected ads through ad networks that legitimate advertisers also use. When the ad is viewed malware automatically infiltrates the computer.

Now that we know the definitions of malware and how it is installed. Find out if malware has infected your computer. Click here to learn about the signs of malware infection.