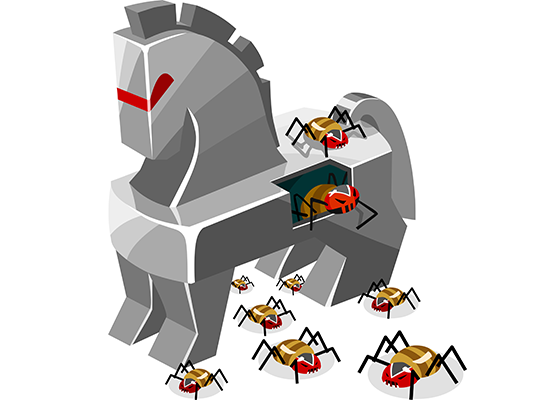 What is a Computer Trojan and its Side Effects

There are two things that in mind when you say the words “Trojan horse.” First, it's a tale from a Greek mythology. Secondly, it's a cyber threat that every single security expert take very seriously.

This threat, just like in the tale, pretends to be useful, peaceful, and innocent. Once you accepted and ran the computer Trojan onto your system, it'll start to perform its destructive and illegal mission – hiding data or files, spying, and keyloggers. A computer Trojan is different from an ordinary computer virus. It can not replicate itself and spread without an interaction with the computer user.

A computer Trojan can act differently based on what the cyber criminal programmed them for. In addition, they're very hard to track once it's already working behind your knowledge. It can lead to several problems that are very hard to solve. Here are the common and popular types of computer Trojan that you might encounter in the Internet:

Just like how its name suggest, this computer Trojan has the ability to steal information from the victim’s computer such as passwords, files, banking details, or even identity.

This Trojan downloads leering software and causes damage to the victim’s computer system.

This can be hidden in games or other programs of a smaller variety and give the attacker control of the victim’s computer.

This gives the cyber criminal sensitive information like passwords or other information programmed to be hijacked.

This computer Trojan's goal is to destroy the victim’s files.

The Abilities of a Computer Trojan

Do you notice that your computer is showing you all sorts of pop-ups and messages? It doesn't matter if it's an advertisement or a message saying your PC is infected. You can sure now that you starting to feel the computer Trojan. You may have contracted a fake antivirus or a spyware onto your system.

If you think that having too many files and running multiple applications all the same time can slow down the computer, it's not the only cause. A computer Trojan can also cause that slowness because it must be using many resources.

You Can't Connect to the Internet

One of the computer Trojan is a slow Internet. Many times, you might not be able to connect to it either. When you know that everyone else in the house or office can connect, be warned. That's one of the Trojan horse virus symptoms. When you already have it on your computer, the computer Trojan could be connecting to a URL or opening separate connection sessions. Because of that, it decreases the available bandwidth or it makes it hopeless to connect to the Internet.

Apps aren't Working at All

An application you really need isn't working at all after minor troubleshooting must be one of the computer Trojan effects. Some programs can work but some of your programs is won't. You should go check all of your security tools and system to be sure.

Are there unwanted windows and browsers that display pages? This is a strong indication of a Trojan horse virus symptoms. The unwanted redirection of traffic to another deceitful website. This can trick you to use a fake website which you won't notice at all.

Your computer language suddenly changed without you changing it. It's a giveaway computer Trojan symptom. Your screen can also show back-to-front and other strange activities can tell you that you have an infected computer system.

Your Antivirus Gone and Firewall Disabled

It's not only files that can disappear in your computer, your antivirus and firewall functions can be turned off during the Trojan horse virus attacks. This makes your computer a lot more vulnerable to cyber attacks. A serious computer security issue is already happening and you

Are Your Files Missing?

This is one of the scariest Trojan horse virus symptoms. Your important files that are missing might have been manipulated by a Trojan virus. The Trojan horse can delete or encrypt information, or move your files to another place. You should be worried when this thing happens to you.

A computer Trojan is undoubtedly dangerous when it takes over your computer system. A good antivirus and security strategy is important in every business and ordinary user. Protect yourself for the convenience that computer Trojan can give in the long run.

What Is ITSM Software