What Is Trojan Virus? How To Protect Your PC(s)?

The term 'Trojan horse' is bandied about a lot within the IT security community. Here, let's take a look at what is trojan, how it operates and how it can be prevented.
Trojan horse is a malware which masquerades itself as legitimate software and is widely employed by the hacking community to break into computers usually to steal some sensitive data or to spy on them. Unlike computer viruses, trojan horses cannot self-replicate themselves and spread within a network. They need some form of human intervention (like downloading e-mail attachment) to activate themselves. 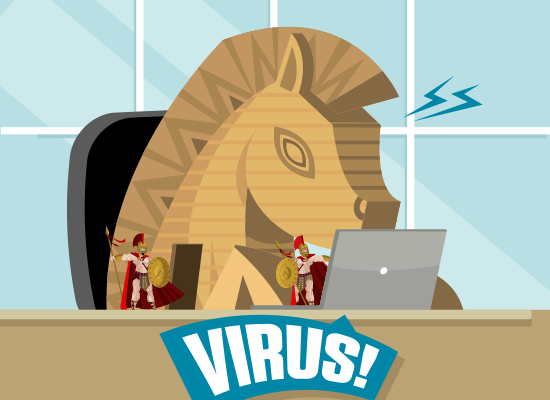 Why Is It Called Trojan Horse?

The term 'trojan horse' originates from Greek mythology. According to the mythology, the Greeks, to win the 'trojan battle' made use of a large wooden horse – supposed to be a peace gesture towards the Trojans and troy – to hide thousands of their soldiers, who would later go on to invade Troy overnight and capture it. As this malware is similar to the 'wooden horse' in that it masquerades itself as a legitimate software to deceive users to download them and thereby infects them, it was given the name trojan horse.

Some of the ways in which Trojan horses can affect your PC(s) are:

How To Protect Your PC(s) From Trojan Horse?

The best way to protect your PC(s) from being infected or attacked by trojan horses is to make use of antimalware or antivirus solutions. A top-notch anti-virus solution like Comodo Antivirus can stop trojan attacks, while Comodo Mobile Security (which is available absolutely free of charge) will provide world-class protection for Android smartphones.

Comodo Antivirus or Comodo Internet Security suite as it is called comes equipped with impressive security features that make it the best antivirus in the IT security industry. Comodo Internet Security employs the Default Deny Protection approach - a technology which is unique to Comodo - in combating, not just trojan horses, but even zero-day malware which poses majority of the security threats today.