What We Do forDetection at the Endpoint

Comodo performs extensive detection techniques at the local level to contain unknown files in emulation and prevent infection to the endpoint if they turn out to be malware. From antivirus signatures to application whitelisting and machine learning, to unpackers, detectors, recognizers, and detection of fileless malware, this section defines them all.

Antivirus is a feature of Comodo Advanced Endpoint Protection along with whitelisting/blacklisting and advanced detection capabilities that together provide multiple layers of protection. Obviously, antivirus alone is not enough to protect the enterprise; however, it has the ability to quarantine and remove known malware from the endpoint.

Comodo is the world’s largest certificate authority, and is uniquely positioned to have intelligence on known good, digitally signed applications and publishers—more than any competing vendor on the market today. Whitelisting allows us to identify known good files, while blacklisting identifies the known bad, leaving the unknown files for analysis.

Antivirus relies on blacklisting where everything coming into the endpoint from the Internet is assumed to be safe unless it appears on a signature list of bad stuff. Essentially this is the definition of a default allow posture, allowing every new or unknown file or app to run on the endpoint, and it is a key reason why enterprises continue to get infected.

Blacklists can’t keep up with the sheer volume of malware today so when they allow unknown files in, some of them are malware. However, blacklisting and whitelisting does help identify known threats and known good apps efficiently to clear the way for other detection methods to identify the rest. This is why Advanced Endpoint Protection has multiple layers of detection, to identify both known bad, known good, and unknown (i.e. zero-day) threats.

Comodo’s dynamic blacklist is constantly updated with global threat intelligence from Valkyrie static and dynamic cloud-based analysis and our 85 million endpoint installations around the world.

Upon detection of a new malware, the industry standard is to create a first signature (CRC signature) quickly to help detect outbreaks. First signatures directly identify the malicious file with a checksum calculation in order to store a short identification of the binary file. This is simple and efficient when you first identify malware for immediate deployment and protection. Then expansive methods are used to develop detections for generic signature, and you can remove first signature.

A virus signature is a string of characters or numbers that antivirus programs are designed to detect. Traditional antivirus signatures are used to check all the .EXE files against a blacklist (known list of viruses) and other types of malware. They also can check if unknown executable files are misbehaving, indicating new malware.

Antivirus programs use heuristics to scan susceptible programs or suspicious applications within a runtime virtual environment. This keeps the vulnerable code from infecting the real world environment. Even in the absence of the latest virus update, this helps the antivirus software detect a new virus, a variant or an altered version of malware. To enable detection, heuristic scanning creates new signatures each time a new virus is found. Heuristic scanning encompasses more than 250,000 new virus signatures.

One signature may contain several virus signatures consisting of algorithms or hashes that uniquely identify a specific virus family. A large number of viruses may share a single signature enabling the antivirus to detect multiple versions during scans. Antivirus may also include signature replacements or the removal of prior signatures when they are no longer able to properly scan for revised signatures.

Viruses are always changing and this is why users are encouraged to install security updates as soon as they are available.

When software vendors create solutions they use generic packers from compilers and installers so users know where to find the data for installation (source files) to decompile or extract data as you would in an archive via generic unpacker. A common example of a generic unpacker is WinZip which follows a standard rfc (generic). It doesn’t need to know about the data inside. Generic packers are also used by malware writers. Executable packing is the most common technique used by computer virus writers to obfuscate malicious code and evade detection by antivirus software. Some malware writers use custom unpackers to keep security vendors from unpacking them.

Comodo has a large set of generic and custom unpackers. Generic unpackers can detect and extract encrypted code from packed executables; therefore, potentially revealing hidden viruses that can be detected by traditional signature-based antivirus software. However, generic unpackers are computationally expensive and scanning large collections of executables looking for virus infections may take several hours or even days. Alternatively, Comodo uses custom unpackers that are commonly found in malware to identify malicious applications effectively.

Another example at the local level is a recognizer in VirusScope that detects the following process actions to determine if a file is trusted or malware, such as this example of CryptoLocker behavior:

After detection of malware, VirusScope creates a report of activities and saves a copy in the CIS data folder (C:\ProgramData\Comodo\Cis) and submits a copy to COMODO servers to share the information. If the detected process is not trusted, VirusScope will show an Alert or perform a default action such as clean up as shown in the screen shot. 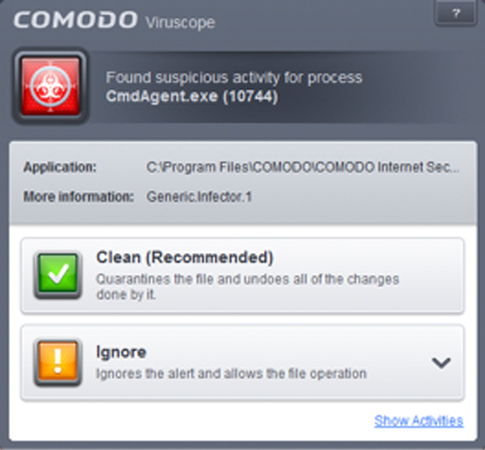 Fileless Malware at the Endpoint

Fileless malware can’t be detected by traditional antivirus because there is no file signature to match. That is why these infections are called fileless—no files are dropped onto the hard drive. Attackers use fileless malware to avoid being detected by traditional security products for: Privilege escalation – to exploit a vulnerability that will give them administrator access to the system, so they can do whatever they want Information gathering – to harvest as much data about the victim and from the victim’s computer as possible (to be later used in other attacks);

Persistence – to keep the malware in the system undetected for the longest time possible. Examples include Advanced Persistent Threats (APTs) that can use any of the following technique:

Emulation imitates a certain computer platform or program on another platform or program. In this manner, it is possible to view documents or run programs on a computer not designed to do so. An emulator is itself a program that creates an extra layer between an existing computer platform (host platform) and the platform to be reproduced (target platform). Because emulation programs implement functionality in software, they provide greater flexibility for detecting malware.

Comodo uses emulation to run unknown files safely in a sandbox environment. This is part of our default deny posture with secure auto containment of unknown files. We don’t let a file run on the host unless we know it is safe. Other security solutions do the opposite with default allow postures they don’t let known malware run but assumed everything else is safe and let it run on the host. Since new malware begins as unknown files, this is how endpoints become infected.

By running in virtualization (emulation) it is possible to view documents or run programs in secure auto containment to determine if a file is good or bad before allowing it to run on the endpoint. There are no performance hits because Comodo OS virtualization technology is extremely lightweight, has no CPU dependencies and is completely application agnostic.

One of the advantages of virtualization is that programs in virtual machines can run at essentially native speed. This is one of the reasons Comodo developed CPU enforced OS virtualization-for security with usability. Comodo can automatically contain unknown files in a sandbox where they can be used safely and analyzed in a safe run time environment and do no damage if they are malware.