What is a Trojan horse virus and how does it work? 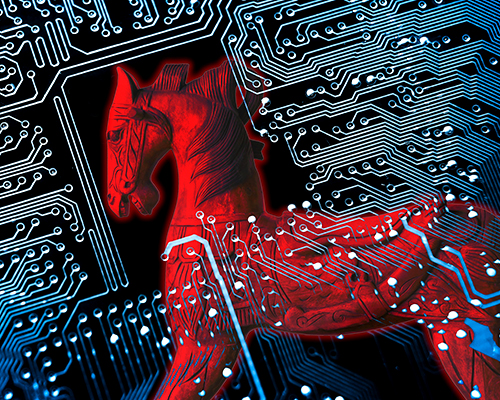 This article explores the question 'what is a trojan horse virus' and explains how proper 'forensic analysis' can prevent them from infecting computers.

Trojan horse virus is a malware which masquerades itself as legitimate software and is widely employed by the hacking community to break into computers, usually to steal some sensitive data or to spy on them. Unlike computer viruses, trojan horse viruses cannot self-replicate themselves and spread within a network. They need some form of human intervention (like downloading e-mail attachment) to get activated.

Just like a computer virus, the trojan horse too is a metaphor deriving from Greek mythology referring to the large wooden horse supposedly used by Greeks to transport their soldiers into Troy, in order to capture it. The 'trojan horse' malware, along similar lines, hides behind a legitimate (and therefore harmless) posing software, and infects computers when users download them. Trojan horse, just like other malware, is not just annoying but can be lethal at times.

How Does Trojan Horse Virus Operate?

Like said earlier, it needs human intervention to activate itself. Like downloading a file or an email attachment. And the moment it gets downloaded, it pretty much operates like other malware. That is, it steals sensitive data, crashes computers or performs other such malicious activities which affect PC(s) or the user's online identity.

Trojan Horse malware can assume many different shapes, some of which are:

How Enterprise Forensic Analysis Can Help?

There are many forensic analysis tools in the IT security market (some even available for free – like our very own Comodo Forensic Analysis) which generate forensic reports that not only indicate whether the network is at risk but also help in assessing the overall security posture of enterprises. Therefore choose wisely and protect your networks against not just trojan horses but all kinds of malware.

Comodo Forensic Analysis (CFA) comes equipped with impressive security features that easily make it one of the best in the IT security industry. Extremely lightweight, it performs comprehensive network scans and classifies the audited files as 'safe', 'malicious' and 'the unknown'. The 'unknown files' are dispatched to Valkyrie cloud-based malware analysis which delivers malware verdicts often within minutes.

As you can realize, CFA leaves no stone unturned when it comes to file analysis and therefore is a forensic analysis tool enterprises like you should be using.