What is a Trojan or Trojan Horse?

A Trojan is also known as Trojan horse. It is a type of malicious software developed by hackers to disguise as legitimate software to gain access to target users' systems. Users are typically tricked by some attractive social media adds who then directed to malicious website thereby loading and executing Trojans on their systems. 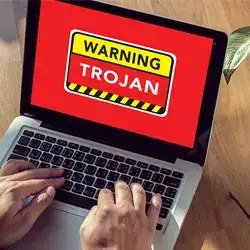 Cyber-criminals use Trojans to spy on the victim user, gain illegal access to the system to extract sensitive data.

These actions can include:

There are many more types of trojans - some can send premium SMS, steal your instant messaging credentials, spy on system activities to capture keystroke data, steal email addresses and gaming credentials.

How Do Trojans Horse Virus infect the system?

Exploit
Exploit is a type of Trojan that contains a malicious code or data to attack a vulnerable software or application that runs on an infected computer.

Rootkits
Rootkits are developed by malware authors to gain access to the victim’s system, while they conceal their presence or their malicious activities from being detected to extend their presence to run and execute on the infected computer.

Trojan-DDoS
These programs are developed to perform Denial of Service (DOS) attacks so as to infect the victim's web address. the malware program sends multiple from the victim's infected computer and forms a network with several other infected computers –to strongly enforce an attack against the target address causing a denial of service.

Trojan-Downloader
Trojan-Downloaders as the name suggests, it is developed by hackers to download and install new versions of malicious programs onto the target victim's computer.

Trojan-Dropper
These programs are developed by malware authors to install Trojans/viruses and escape the detection of malicious programs. Most of the traditional antivirus programs are inefficient to scan all the components this Trojan.

Trojan-FakeAV
Trojan-FakeAV programs pretend to operate like an antivirus software. They are developed by cyber thieves to obtain money from the target user – in return, in order to detect and remove threats, despite the threats that they report are non-existent in real-time.

Trojan-GameThief
The main targets for Trojan-Game Thief are online gamers and their prime motive is to steal the user account information.

Trojan-Ransom
Trojan-Ransom is developed to alter data on the victim's computer – so that the system doesn’t perform its function correctly and also it does not let the user, use certain data. The criminal would demand a ransom to be paid by the victim to unblock the restricted access to the data and restore the computer’s performance.

Trojan-Spy
Trojan-Spy programs, as the name suggests, can spy on how the victim is using the computer – for example, tracking data, taking screen shots or extracting a list of running applications.

Trojan-Mailfinder
These programs are developed by hackers to extract email addresses from the victim's computer.

Easy Steps for How to protect against Trojan Horse Attacks?

Cyber criminals send emails with malicious links or attachments. Users get tricked by attractive advertisements and offers and when they open the attachment or click on the links, get their device infected with a Trojan Virus.

Installing the right endpoint protection software is critical and it would help users to stay ahead of trojan attacks. Comodo Endpoint protection integrates unparalleled antivirus, robust firewall, anti-spyware, application control featuring host intrusion prevention techniques - all in one single console to deliver comprehensive protection. The Endpoint protection platform from Comodo also features a future proof technology called the containment technology that creates an isolated virtual environment, hard drive, registry, and virtual COM interface. If any unknown files try to enter the system, it will continue its malicious activity, however, the malicious activity is restricted only in the virtual environment. This ensures that your systems' original document and files are not infected. With all Comodo's Containment technology, all kinds of infection are at bay.

Trojan Horse Definition
How to Get Rid of Malware?
What is a Keylogger?
Rootkit Definition And Meaning
Website Malware scanner
SIEM

How To Prevent Ransomware