What are Spyware and Malware doing on your computer? 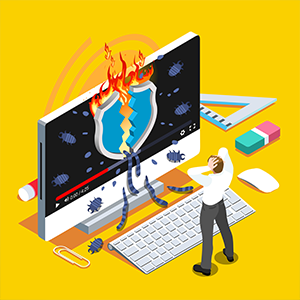 Spyware is a type of malware that is used to monitor computer activities, spy on the victim, and steal personal information. While, malware is a broader term where spyware falls under.

What is Spyware and Malware?

Spyware steals personal information by monitoring computer activities. Just as its name implies, Spyware spies on the victim’s computer to collect information such as password, credit card number, and pin.

Because it works secretly in the background, it can remain undetected for a long time. The victim usually has no idea that there’s a spyware on the computer.

According to The Guardian, there were 130 cases reported to the National Stalking Helpline last year that involved spyware. The victims had no idea that someone was watching them through their webcam and listening to their phone calls.

What are the other types of Malware?

The other types of malware perform different functions.

Ransomware is a type of malware that encrypts files, photos, and documents so that the user is denied access to them. Once encrypted, the hacker demands a ransom to restore the valuable files.

Trojan on the other hand, is malware used to gain full access on the computer. It allows hackers to copy, modify, or even delete data without being exposed. Trojan often disguises as a useful application such as fake installers or updates.

BOT spreads infected ads and pop-ups on different websites. It also spreads malware that pretends to be a search engine query. To protect server information against BOT, some websites require CAPTCHA.

KeyLogger secretly monitors the keys pressed on the keyboard. By recording the keys typed, KeyLoggers allows hackers to steal login, password and, pin. Unlike the other malware, KeyLogger functions without affecting the computer performance making it hard to detect.

Adware is installed through an infected software or website. Once installed, it produces uncontrollable pop-ups and ads that block the legitimate windows on the monitor. Because Adware promotes products in an intrusive way, some advertisers sponsor it.

Virus spreads on the computer by replicating itself. One of the most popular computer viruses called I Love You virus infected millions of personal computers and big corporations before including The Pentagon, the British Parliament, Ford, and more. Virus overwrites and destroys important files on the computer.

Worm slows down the computer and network by overloading the system. Once installed, it replicates fast, but unlike a virus, a worm is incapable of destroying computer data. It simply outnumbers the legitimate files on the computer that results in computer malfunction.

Spyware and malware are spread on the Internet. Their ability to destroy and steal files and data makes them harmful. That’s what is spyware and malware for. For that reason, they must be prevented from reaching the computer.

Click here to learn about what is malware and spyware prevention.